This video seems to me very interesting. In this one, Protestant pastor and theologian Christian Cuthbert is explaining how the Carolingian Church Reform took place. He is especially talking about the Heliand and the conversion of the Anglo-Saxons. Below is the transcript of his speech. 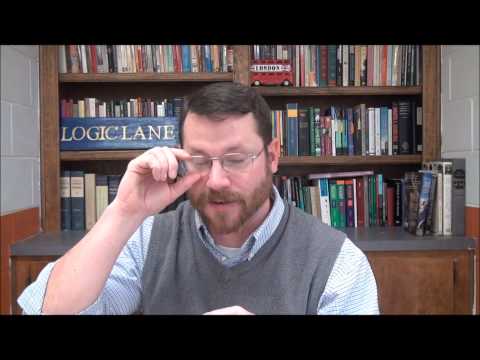 « We’re going to spend a little time talking about the reforms that Charlemagne enacted in Frankia in order to improve the Church. Like we said before, since Clovis, Frankia and the Franks were christians and even though they had a interesting and spurious beginning of their christian culture. They were committed to their christian culture. By the time, Charlemagne came around ; he noticed that there were several problems. Though he noticed that his clergy was poorly educated. He’s notice his clergy lacked moral discipline. The clergy were almost indistinguishable in behavior from wealthy aristocrats. That was a problem and the monastic observance was very lacks so these monasteries were not being very effective. So, one of the reforms that Charlemagne proposed was to standardize the liturgy, make sure that every christian when they walk into their local church was worshiping the same way and to set standars on worship. Carolingians also promoted a sound financial basis for local churches by making tithing mandatory. The allegation the tithes was not really appreciated at the time and became a sticking point between the Church and its parishioners for many many years. Louis the Pious imposed Benedictine monasticism throughout the Frankish Empire because another attempt to standardize christian faith and practice. Carolingians did not reform the Church to the extent that they wanted but they made some impressive improvements and raised the effectiveness both of local parishes and of monasteries. Now this had another pratical consequence by raising the effectiveness of monasteries. They were able to raise the effective submissions because the Franks in modern-day France approximately were christians. Their neighbors to the east, Germany and the Germans in Germania, were pagans or anglo-saxons pagans and the Franks took it upon themselves to promote christianity in Germania and now that they had some stable and financially sound institutions. They were able to make a greater impact on the kingdoms around them. To missionnaries, in particular a guy named Willibrord and a guy named Winfred, who was later known as Boniface, became Frankish missionnary to the Anglo-Saxons in Romania. They work for the conversions of those who had remained in their German homeland rather than going to the Anglo-Saxons that were in England. England was already converting the Anglo-Saxons at the time period but no one was addressing the ankle Saxons back in Vermont and they had some interesting methods as missionnaries. They would establish a modded monastery and a bishop in a pagan territory instead of military conquest. This was not a military takeover of Germania and they were all forced to become christians ; this was a persuasion. This is missions the way we think of missions today : a good chunk of conversion in the Middle Ages was done through political conversions and military actions. This was done through mess illogical persuasion and it produced one of the most fascinating documents out there a translation of the Bible or parts of the Bible into anglo-saxon language, called the Heliand. And Heliand was not necessarily a translation of every book in the Bible or every episode in the Bible. It wasn’t even technically a translation as far as we understands : converting one language into another language. This was more a cultural presentation of Christianity in which the Franks, these missionnaries Willibrord  and Winfred reinterpreted the culture of the Bible to make it more palatable to anglo-saxon culture. Let me give an example : we are all familiar with the story of Jesus in the garden before he was captured and how Peter leaps to his defence and cuts off the ear of the roman soldier and Jesus reprimands Peter heals the ear and the moral of that story is Peter screwed up again this how we are treat those who oppose us would love not with violence. In the Heliand that’s not the moral of the story : in anglo-saxon culture, when you look at their epics like Beowulf and some of the Icelandic family sagas, you see a cultural phenomena known as the « hero », and his veins, his henchmen, his minions. And a hero was great in battle. And the thanes, their job was to fight right alongside their hero. The proper place fot a thane to die is fighting right alongside as healer and what the Heliand did is it reinterpreted the story of Jesus and his apostles to Jesus the hero and his thanes so when you read this passage in Heliand, Peter by jumping to the defense of Jesus is almost heralded as a good Anglo-Saxon. He’s right there fighting alongside his hero and you kind of lose this you know sense that Peter did something wrong it’s an affirmation of anglo-saxon culture and tries to demonstrate to Anglo-Saxons that Christianity and anglo-saxonism are consistent with one another. It’s an interesting debate to talk about wheter or not that’s proper or to what extent do we need to translate not just the words of Scripture from a lot one language into the language of the people we are ministering to what extent do we have to interpret to recast the greater truths of the Bible within a culture. So, in that sense the Heliand and frankish christianity was this tremendous milestone to the brand of mythology that we’re more familiar with and raises this question of appropriateness and who is effective even if it is effective is it something that we should do but the bottom line is despite, Frankia becoming christian at the behest of Clovis, their leader. They took the christian very seriously and sought to purify it and to become innovative in it and so doing made christianity a fresh system of belief a first practice during the medieval period. I think that’s fascinating personnally. Wish we had more time for the Heliand. That is just awesome ! »

Oral presentation about the blog